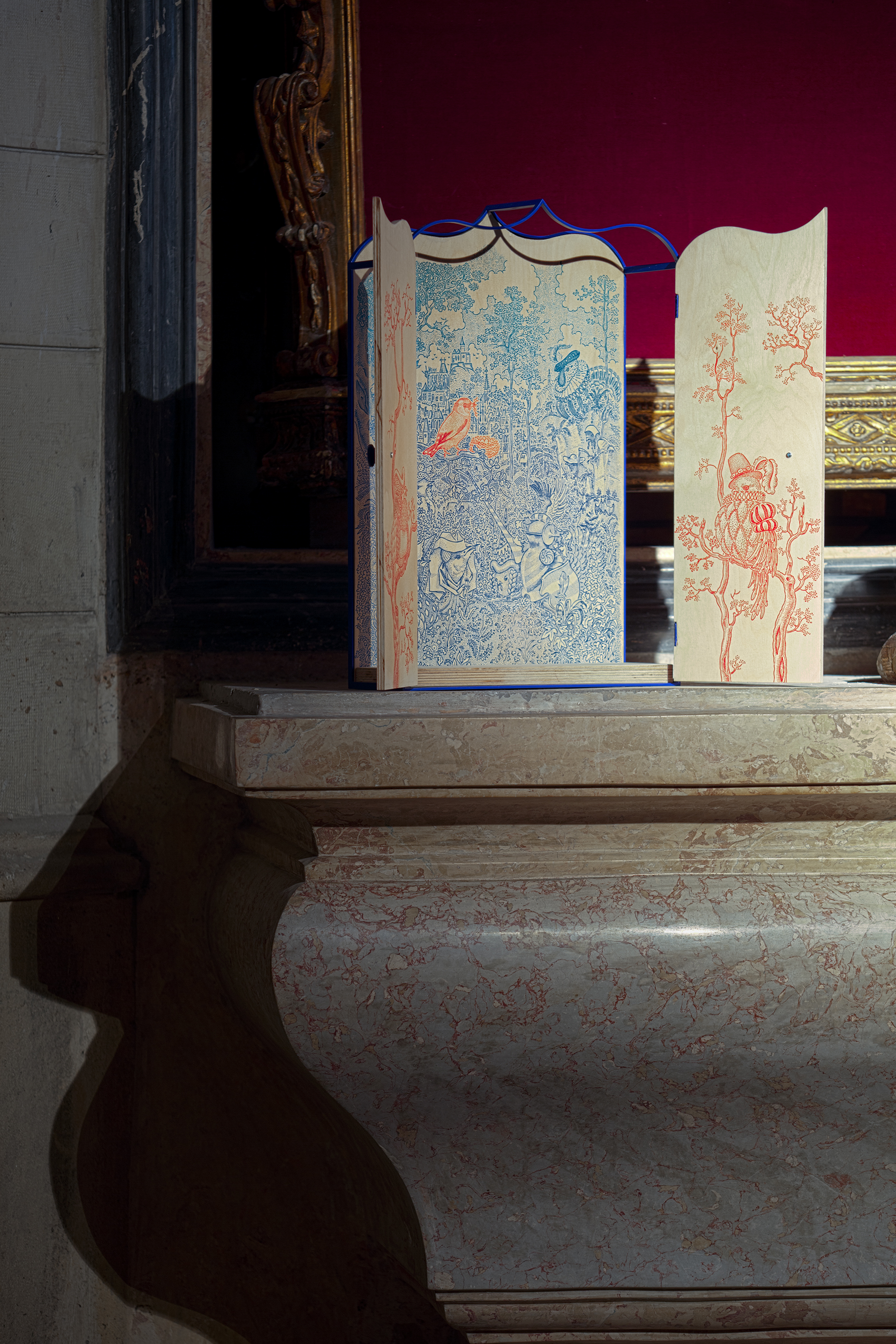 The Prague Gallery Křehký invited the Rauminhalt Gallery from Vienna and the Kabinet Gallery from Bratislava to the chateau to introduce their representative artists and designers. The Křehký Gallery presented the opening of the “Altar of St. Francis”, a joint work with designer Klára Šumová and the newly elected illustrator of the year of the Czech Grand Design Awards Michal Bačák.

The award-winning designers introduced the unique concept of a home altar directly inside the chapel of Mikulov chateau. “The Altar of St. Francis is a personal, splendid illustration but also a piece of furniture. It is a votive object for our intimate world. Moreover, it works as a cabinet, it is possible to hide treasures in it,” describes Klára Šumová. “It is not primarily a religious theme of the altar, it is rather a beautiful box for personal treasures. Michal Bačák worked here with the aesthetics of renaissance knightly scenes, but the knights are in his presentation, which always slightly shifts reality, factual birds, dressed as knights and their ladies. The only true religious attribute is the goldfinch, a Marian symbol that is not dressed and forms the heart of the altar in its simplicity,” explain Křehký curators Jana Zielinski and Jiří Macek. The altar will be accompanied by wooden sculptures of birds and in its complete form will be on display at Designblok in Prague.

The Vienna Gallery Rauminhalt, led by Harald Bichler, introduced its key artist, Austrian Patrick Rampelott. In his Vaporware collection, consisting mainly of lamps and sofas, he worked on his main themes: obsession with old styles, remodelling them into new pieces using contemporary means of expression, blurring reality between virtual and real and transforming the original function of the objects into completely new contexts.

Vlado Zelenák from the Bratislava Gallery Kabinet introduced several artists. Mira Podmanická and Markéta Nováková presented a collection of handmade vases called “Louka” (“Meadow”) which are originally sculptured after the traditional castings into porcelain moulds and each one of them is an original. Simona Janišová introduced the play with the traditional production of ceramics, while the Mejd studio presented the metal light fittings, which are poured directly into plaster moulds and carved out from them as sculptures into the final form.

In addition to the gallerists there was also an exhibition with a theme called “Les a Lov” (“Forest and Hunting”). At this exhibition Markéta Kratochvílová introduced her jewels, who was inspired by Korean pearl hunters. She was awarded a jewellery designer of the year by the Czech Grand Design Awards. Barbora Moravová with her installation “Lovec tmy” (“Hunter of Darkness”) was also exhibiting and last but not least Lucie Miklóšová was showcasing her collection “Lovci a sběrači” (“Hunters and Collectors”). Everything was compiled and assembled by the original architecture from H3T architects. The renowned designer Jiří Pelcl presented a complex of forest glass in the exhibition called Forestglasscollection.

The seventh year of the art design festival took place from the 26th May to 28th May 2017. The exhibition was on display at Mikulov chateau until 3rd September 2017. In addition to a number of exhibitions and collectible previews was ensured as an extensive accompanying program such as the tour of the Pirsc Porcelain manufactures, festival brunch with a presentation from the designers, a trip to the Lednice-Valtice grounds and a traditional pilgrimage to the Holy Hill.