Made in: Czech Republic

1 in stock (can be backordered)

The four-vase by the Dutch designer, Richard Hutten, reminds of a big coding game. Each of its four vases bears six vertical lines containing six words, which can be combined by rotating the individual vases into sentences. Some of them are odd, some funny, while others conceal a fundamental message – such as “Love You Forever”. If you remove one vase from the grouping, it reveals a pattern designed by Norman Wilkinson after the cover pattern known from the submarines operated by the British navy during the Second World War. Hutten comments on his vases as follows: “‛Camoufleur’ is a person who designs a camouflage. And ‛fleur’ moreover turns to flowers, a function which these vases can have as well.” 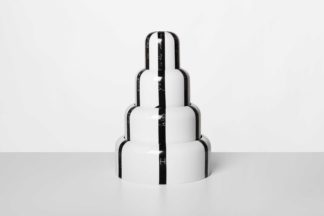