Light object constructed by the method of spatial stained glass. “It may not seem so, but robot is a purely Czech word which the painter Josef Čapek invented for his brother writer, Karel. If we compare the word with Josef’s oeuvre, we cannot resist the impression that he anticipated the looks of a robot in his paintings. Taking his work into account, I tried to give his idea a third dimension,” Jakub Berdych says. Robot is usually defined as a machine working with a certain degree of independence, performing assigned tasks in a way designated by the taskmaster. The Krehky Robot is a free robot, a static figure – but how enthralling and radiant it is! It is neither a milling nor a cleaning machine. An R2D2 of the world of beauty and fragility; a materialized version of Art Nouveau and modernist history and Czech Cubism as well as the Futurism of the present. It comes in a limited edition of five pieces and is custom-made. 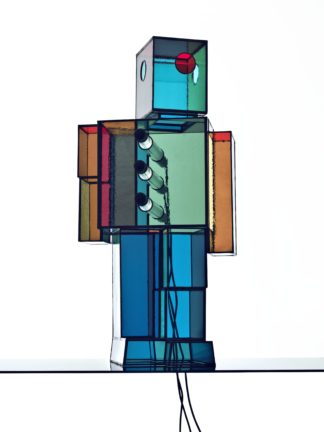